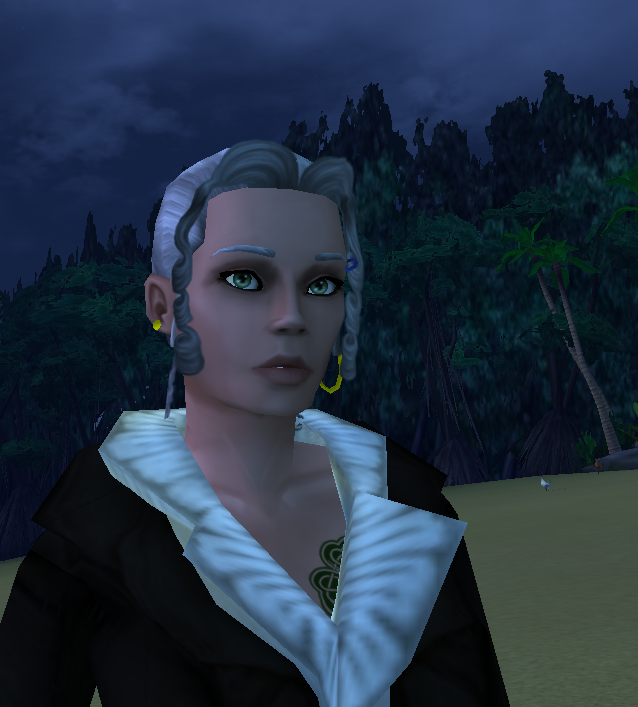 Kat Five Knives was born into a family of merchants.  Her love for the sea and for commerce was innate.  When her family was destroyed by fire set by the EITC, she sought out the only person who could help - the only person who could live through fire.. a Firewalker.  She combined forces with Jason Firewalker who had been through similar circumstances with his family.  Together they forged a guild that could withstand the fire of time, the coals of society, and the flames of monotony.  There's nothing stronger than the metal that has been forged by fire.  There's nothing stronger than the Dark Archive.

KFK first came to POTCO when the game was less than a year old.  Fresh from ToonTown, the game looked familiar and even had the same launcher.  The first few levels were free but it only took an hour of play before she was hooked and purchased an ongoing subscription.

KFK's first friendship was with Jack Bladerage.  He helped her defeat some flytraps that were a bit too high for her with his amazing staff.  Up to that point she had resisted all guild and crew invitations, not knowing exactly to what she was agreeing to do.  When Jack invited her to his guild, there was no hesitation.  The GM of the guild just happened to be the sister of one Jason Firewalker.  When Jason was playing, KFK was automatically on his friends list, as a player friend.  He started to talk to her and found that they had quite a lot in common - a love for science, mathematics, and philosophical ideas.

When Jack stopped playing, KFK moved to other guilds, each with it's own tragic story of negligent and guildicidal Guild Masters.  Jason experienced similar issues.  When KFK presented the idea to Jason that they start their own guild, one that is stable, with rules, and with officer accountablitiy, he agreed to lead it.

The guild quickly grew and prospered.  Many notorious pirates came into our fold:  Black Beard, Drew, John Foulroberts, and Charles Warmonk to name a few.  With them came many looter friends who spent hours and hours in the game.  This kept the guild socially active and was attractive to new players.  We also had many helpful members such as Kitty, Char Gold Rogers, Kevin Ironbeard, Red Beard, Molly Heartbreaker, Horatio Stormbreaker, Kate Wildcastle, Tobias Darkfitte, Maggie, Anna Banana, Terrance, Johnny Darkbones, Patrick, Nate, William Foulbutler, Thomas Darkskull, Captain T, Mekelle, Big Richard Fireskull and his brother little Richard Fireskull (aka Samuel), Mike, David Ironeagle, and so many others (my apologies if I left you out).  There are so many to thank for the initial work that lovingly built this guild.

The Dark Archive is a testament to those who belong to it.  All of us have agreed to those "rules", which were established early on.  All of us have experienced the stability, the love, and the hugs.  We are family.  We are one.  We are pirates.

As most of you know I'm a high school math teacher.  I've had the pleasure of tutoring and mentoring many young pirates through algebra and geometry - even some college pirates in calculus.  I've enjoyed watching many of you grow from youngsters into fine, eloquent, and educated members of society.  I like to think that our guild played some role in shaping the lives of our members for the better.  Be the best you can be.  Think positive.  Never let your mates down.

I'll always have your back