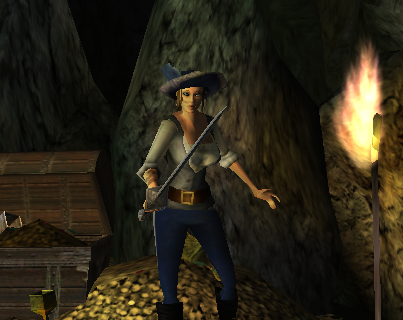 How long have you been playing POTCO/TLOPO? I only got to play POTCO for a month right before it closed, but I have been playing TLOPO since December 2016

What are some of your favorite things to do when playing TLOPO? Sailing, SvS and helping others out when I can.

Favorite weapon: Admiral's Cutlass (although I don't own it yet)

Do you play any games other than TLOPO? Assassin's Creed: Black Flag

Hobbies: I make assorted crafts and dabble in drawing tattoo stencils. Cooking, baking, I love plants and use to garden. I also like to make costumes and can sew as well as embroider. Oh and I kinda like writing a little bit.

About me: Hey guys, I'm Charlotte Ironphoenix (please don't call me Char!). I've been a member of Dark Archive for most of my TLOPO pirate life. I am a regular storyteller at Dread Poet Robert's Storytime and it was my honor to join The Crew in March of 2018 as part of the Storyline Team.

I love anything to do with sailing and I'm usually more than happy to help people find ships they are looking for or go a few rounds in SvS. I'm also always willing to loan my ships out to guildmates (currently I have a rank VI stormchaser war sloop named the 'Sapphire Phoenix' and a rank VI skull & bones war frigate named the 'Laughing Raven').

I'm not in game a whole lot right now, but I'm almost always reachable on Discord (Charlotte Ironphoenix#8342), so feel free to DM me if you have a question about anything or just would like to chat.